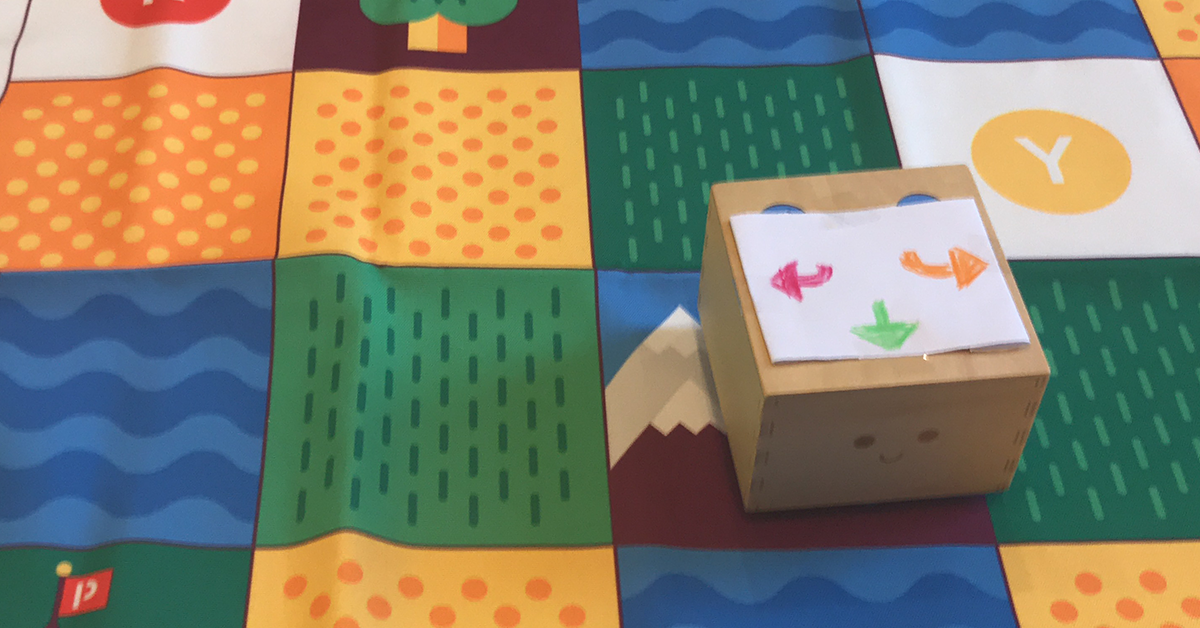 Using the Cubetto with Direction Indicators

My 3-year-old daughter enjoys playing with the Cubetto, however, she was having a hard time with the commands to change direction. In my review of the Cubetto, I mentioned that I will experiment with putting stickers on top of the Cubetto. This post describes how I tackled this and the reaction of my 3-year-old.

I didn’t want to go down the route of permanently modding the Cubetto as I quite like the simplicity of the robot. In the end, I opted to go with a minimum viable product and just taped a piece of paper with coloured arrows on the top of the Cubetto. If the experiment is successful, I will find a more permanent and elegant solution.

Using the Cubetto with the Indicators

The first reaction of my daughter was to ask why I have taped a piece of paper on the Cubetto. In fact, she wanted me to remove it. I then explained that we will be using the arrows to help us move the Cubetto around. She was happy with this and I then explained how we were going to use them.

I started off by showing her that I used the same colours as the command blocks. Then I went through with her the function of each block. I know she remembers the sentence for what each block does, however I don’t believe she understands the concepts of arrows and turning yet.

Playing with the Cubetto

I opted for a different approach to playing, since I was trying to teach her that the blocks match the arrows. Typically, I would tell my daughter which blocks to put on the board and she would follow my instructions. We then used to go through each step so that she understands what the robot will do and only then press the execute button.

This time around I decided that it would be better to focus on just using sequences of single blocks. I believe this is important for her to really understand what each block does before trying to build more complex sequences.

Initially, she was confused why I was asking her to choose the colour from the paper, however slowly but surely she started to get the gist of it. She still struggles with the turns, so I would say she’s getting them right 60% of the time. We had better results with the move forward blocks. In fact, she started realising that if she wanted the Cubetto to move, she needed to use as many blocks as squares.

Even though Primo Toys say that the Cubetto is meant for children with aged 3 and over, the instructions they provide seem to be targeted at older children who understand more concepts than 3-year-old kids. For example, the instruction book starts with compass directions which I believe is a hard task for any 3-year-old. This is the only thing that I believe Primo Toys could do better with the Cubetto as I still strongly believe that the toy is a good fit for 3-year-olds. The direction indicators definitely helped with the experience my 3-year-old had.

I’m quite happy with the results of using the direction indicators. I believe that she will find it easier to understand how the Cubetto works by leveraging the indicators. The only issue I faced arose because I didn’t (or didn’t know how to) explain that we weren’t going to do full sequences. I realised this since at one point she told the Cubetto that he didn’t move to the correct place. This had happened because differently to the previous times we had played together we had only given the Cubetto instructions to turn around, and not to turn around and move forward.